A core aspect of software adoption involves working effectively with stakeholders. Far from an optional step, this aspect requires significant attention early in the adoption process. First, ways to identify which
stakeholders to include will be explained. Then, ways to actively involve them will be provided. Although the involvement of stakeholders is proposed to begin after Step 1, it is possible that a stakeholder group should be involved earlier—during Step 1. In fact, for situations mentioned in Step 1, when the software type is initially unknown, a more thorough stakeholder-related effort is suggested to take place during Step 1.

Identifying the full range of stakeholders is important for two reasons. First, it establishes a deeper understanding of who should be included in the decision-making and adoption process, increasing the likelihood that the needs of each group are met. This, in turn, helps the software adoption process to be more effective and run more smoothly. Second, it helps avoid the pitfalls that can occur when software decisions are made on behalf of software users without their direct involvement in the process.

Pitfalls that may happen in this case include a lack of use of the software by users or a premature commitment to a software that does not have all the required functionality—either of which may lead to a waste of funds and staff time.

Software stakeholders can generally be broken down into three categories:

The software user groups encompass everyone who will interact with the software; they should be identified up- front to ensure later steps of the adoption process take the viewpoints of all users into account. For some types of software, the user groups include both members of the public and agency staff. For on-demand transit operations, for example, typical software components include an app for customers (i.e., public users), an app for vehicle operators, and a management console for operations staff. This diversity of software interactions leads to a more complex set of user groups. Each user group will have a different set of requirements based on their needs.

Influencers are stakeholders that won’t directly use the software, nor will they be procurers or managers, but they will provide input into the process. For example, it is common in human services transportation to include the advice of groups that represent older adults, individuals with disabilities, and others with specific mobility considerations. Such groups might review the software options from an online accessibility standpoint or check that users can communicate specific types of information regarding accommodations through the booking process (e.g., inclusion of a travel companion).

Staff at small transit agencies are often wearing many hats and have little available time, so it is critical that the stakeholder involvement aspects of software adoption be handled in an efficient, yet effective, manner. To this end, three key activities are proposed.

Step 2a. Create a Stakeholder Map 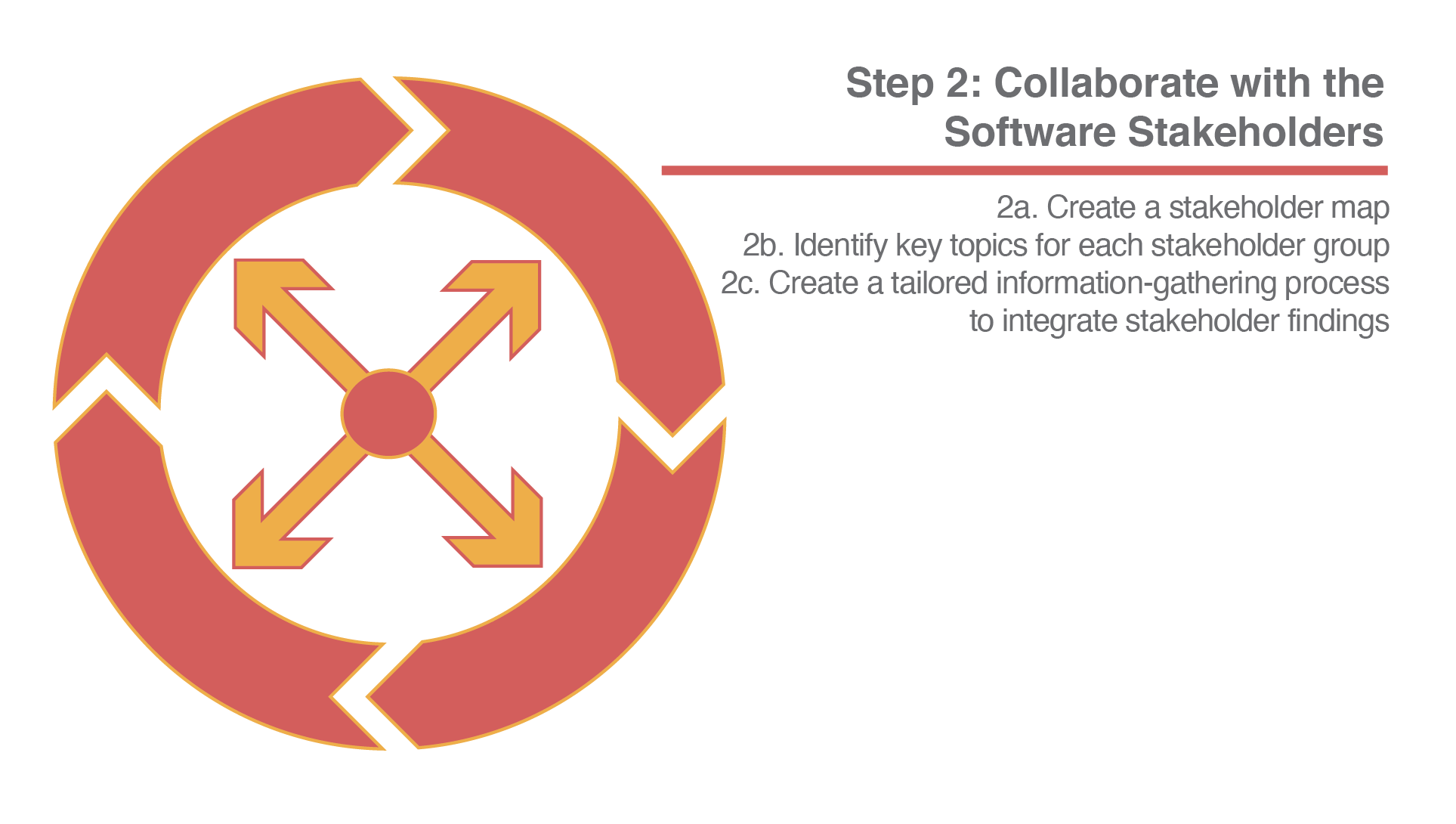 Step 2b. Identify Key Topics for Each Stakeholder Group

Each group will have a set of topics that pertain closely to their interests. Points to consider to help identify the key topics for each stakeholder category are shown in the table below.

Gathering information from stakeholders, overseen by the software adoption process lead, would typically be handled during virtual/in-person meetings and events. Planned meetings and events should be built into the adoption process and procurement timeline to ensure the input gained aligns with the decision-making process. Communication methods should be tailored to each stakeholder group and individual stakeholder as much as possible. Points to consider for approaching this process are shown in the table on the following page.

Aligning user group needs with specific software features and functions can be a challenging process, especially when the user group includes members of the public, but also for internal staff in some cases. If this becomes too difficult to handle internally, an agency may benefit from hiring a consultant specialized in user experience. Such professionals formalize the connections between the needs that users have for software and what a software can provide to help make the most effective match between the two—a promising investment for particularly complex software adoption efforts.

It can also be challenging to gain access to members of the public in order to gain input. An agency may have a list of members of the public they commonly reach out to who serve as representative stakeholders on certain topics such as service changes or policy changes. Such a list could be leveraged for software topics as well; it could potentially be located by inquiring with staff members across departments to find out if one exists. The software adoption process lead could also check into local organizations with regular events where such contact could be made. In addition, partner organizations may have advisory panels or other organized groups that include such contacts.

Gwinnett County Transit (GCT) is the transit agency serving Gwinnett County, Georgia, part of the Atlanta metro area with an estimated population of 936,250.12 In 2018, GCT decided to pursue a microtransit pilot project in Snellville, a municipality of around 20,077 people in Gwinnett County. The microtransit service was planned to serve the general public, without any eligibility restrictions, and GCT also had plans to expand into at least one more microtransit service area in the coming years. The idea of having a pilot project, prior to a wider service rollout, was viewed as a logical way to approach a new service type in Gwinnett County—allowing time to work out issues early in the operation. GCT was experienced in providing demand-responsive ADA paratransit service, but starting on-demand microtransit that used advanced software would certainly involve a learning curve.

GCT put in place a series of activities to gain input from key user groups, especially the GCT staff members who would be using the platform daily. Vehicle operators and their supervisors were one key group, managers and administrators of the overall service were another, and customer representatives were included as well. GCT tailored an information-gathering process to ensure the points of view of these groups were incorporated into decisions.
The pilot project ran for 8 months, from September 2018 through April 2019.13 Having the pilot project for 8 months, prior to expanding the service into a wider program, provided GCT with a unique opportunity. The agency could glean information based on real day-to-day operational experience prior to embarking on a procurement process that would commit the agency to a software platform for a year or more. During the third month of pilot project operation, GCT held informal group interviews with the vehicle operators and their supervisors. Since they had already been providing trips for a few months, they had a lot to say about what was going well and not so well, as well as reflect on typical customers and share their general observations.
For example, the vehicle operators mentioned that they wanted the ability to see in advance if an upcoming passenger would require assistance with a mobility device, which was not possible in the pilot platform. This information helped them to mentally prepare for what was coming next. They also wanted the option to provide information when they needed to stop for unplanned maintenance needs or other purposes, so that the reason, precise timing, and location of the unplanned stop could be well documented. Further, the pilot software did not track all the details of the routes, such as the period between departing from the transit headquarters and officially starting the microtransit route, and this functionality was requested. Since asking about the gender, age, and other details of the passengers was deemed too personal to request voluntarily via the public-facing app, the vehicle operators shared insightful stories about the passengers. Passengers often spoke with the operators and told them what they thought about the new service. The operators shared that a number of passengers mentioned appreciating the independence the service afforded them. There were visually impaired passengers who typically did not leave home as often without the service, and older passengers who were going to the movies and other places more often just for fun, for instance.

Managers and administrators of the service had additional ideas about what the platform should include. For example, they wanted the data reporting process to the National Transit Database (NTD) to be more seamless—transmitting the data points from the software to NTD directly with limited involvement on their part. They appreciated the wide range of reporting and data options the pilot platform had, but wanted a better fit for “executive decision-making” purposes, such as a daily dashboard of the top 5-10 indicators that needed to be continually monitored. They wanted more data on where trips were going around Snellville (i.e., daily/weekly/monthly “hotspots”) as well as details on trips that connected with fixed-route options in the GCT service area—to better understand how the microtransit service supported cross-area connectivity.
In addition, they wanted key data points to be compiled in a way to help “diagnose” potential reasons for no-show trips, when a passenger booked a trip but never came to take it.

Stakeholder findings were integrated into the heart of the software platform selection process, the Request for Proposals (RFP) GCT planned to use to guide the procurement. Unfortunately, GCT was unable to scale up to a microtransit program after the pilot finished, although GCT’s management considered the pilot highly successful and popular with passengers. Nonetheless, the microtransit software platform RFP document, which was drafted during the pilot period, was broken down into the typical software components along with key features and functions that the stakeholders requested—marked as either “required” or “encouraged.” In this way, the information gathered from stakeholders was a direct input into the procurement and decision-making process. Further, GCT planned to have live demonstrations of the software options to verify the features and functions, also planning for the stakeholder groups to play a strong role during the demonstrations by considering more subjective aspects of the software such as ease of use. The various users of the software were put in the driving seat, so that they had a strong voice in which software platform would have been selected.