An API (Application Programming Interface) is the translation tool that allows two applications, such as embedding a Google Map trip planner into a website, to communicate and interact with each other. APIs are versatile and can be used to allow databases, operating systems, computer hardware, and web-based systems to “talk” to each other.  APIs must be standardized and are governed by a set of rules that define how computers, applications, servers, or machines interact. An open API (also referred to as a public API) is an API that is publicly available on the internet so that any developer with permissions can access web applications, software, and/or data for free. This is opposed to a closed API that is not accessible openly on the internet and is tightly controlled.

Why Open APIs Are Important

Open APIs allow software developers to connect older legacy systems and technology to newer systems more easily. Open APIs allow for more flexibility to change systems without a fear that the new system won’t be able to “talk” to older agency IT infrastructure.

Integrate with other 3rd Parties

Developers use the open API to link to data sets and integrate with 3rd party apps that the public can use.

No Need for Proprietary Hardware

Eliminating the need for proprietary hardware means that an agency can pick the vendor, leading to a more competitive procurement process and cost savings.

It is faster to implement systems with open APIs because a good API has all the building blocks in place already to allow developers to build, connect, and integrate applications quickly and efficiently.

Providing an open API allows developers such as customers, partners, vendors, and the general public to use their creativity and ingenuity to create new apps and uses for technology.

Above all, open APIs provide transparency in data and business processes, which can, in turn, result in enhanced public trust of the agency. 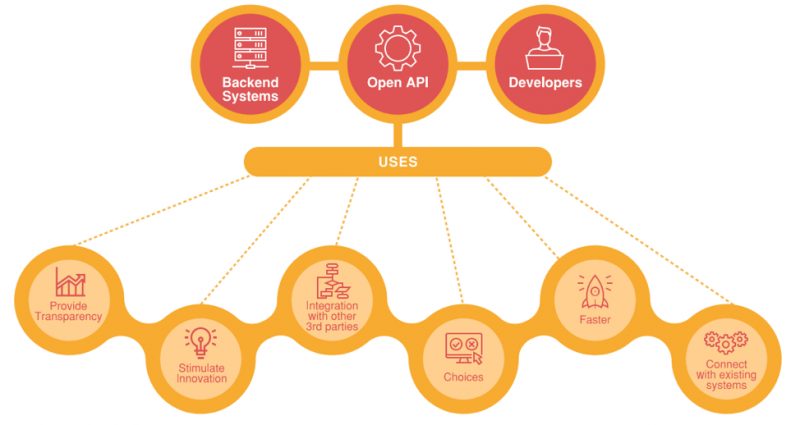 How Open APIs Are Used in Transit

The MBTA provides access to their open data through their vendor partner Constant Contact software called “V3 API”. Developers have access to static and real-time route and schedule information, vehicle positions, alerts, facility information, predicted arrival/departure times for routes at stops, and performance data. Over 40 apps have been developed to alert riders when the bus/train is coming by developers using the V3 API.

Trip planning apps can use open APIs to integrate multimodal trip planning with mobile ticketing platforms and alerts. aTa Bus in the Flint Hills region of Kansas integrates trip planning through Transit App with Token Transit mobile fare payment to provide a single location for users to plan a trip, see real-time crowding levels on the bus, track their bus, and pay their fare.

View the PDF version of our factsheet here

This webinar provides the definitions of open source software and open data, and how transit agencies can benefit from using them.